This is the account of the heavens and the earth when they were created, in the day that the Lord God made earth and heaven.

Then the Lord God formed man of dust from the ground, and breathed into his nostrils the breath of life; and man became a living being. [Genesis 2:1-7]

There’s this question that keeps coming to me…

“What did Adam know?”

I mean, think about it for a moment. All our preaching/teaching/debate regarding “culture”, “worldview”, the “fallen world”… all that…

A friend spoke to me the other evening about a sermon they heard about Adam at the Creation. He spoke of Adam’s great intellectual endowments and prowess. How magnificent must God’s First Perfect Created Man have been! True… all true…

But I had to respond with a question the Lord has buzzed in me for a long time… “What did he know, in that first instant?”

This all truly has a point which will develop over the next few days, but before that I’d ask that you spend a few moments building the foundation of this discussion and

Imagine… God fashions Adam from the dust of this (new) material universe… God “breathes spirit” into him… Eyes open and here, for the very first time… very first moment in all of history there is…

But… there is nothing else! Adam opens his eyes and sees… the Face of God.

Adam knows nothing about God. No memory. No “intrauterine” memories or sensory stimuli. No parents, no culture, no nursing and nurturing… not even language.

Adam… is the ultimate tabula rasa, the blank slate. God now must grave onto and into Adam all the knowledge, the learning, Adam needs to live fully as a human…

Before anything else happens in the Garden, before there is even speech, just consider this question, “What did Adam… what COULD Adam… know in those first moments when he opened his eyes?”

Until tomorrow…. Grace to thee… The Little Monk

“Jerusalem, Jerusalem, who kills the prophets and stones those who are sent to her! How often I wanted to gather your children together, the way a hen gathers her chicks under her wings, and you were unwilling. Behold, your house is being left to you desolate! For I say to you, from now on you will not see Me until you say, ‘Blessed is He who comes in the name of the Lord!’” [Matthew 23:37-39]

When I remember You on my bed,
I meditate on You in the night watches,
For You have been my help,
And in the shadow of Your wings I sing for joy.
My soul clings to You;
Your right hand upholds me. [Psalm 63:6-8] 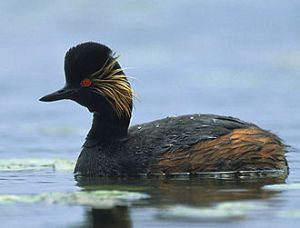 I love nature programming on Discovery Channel or PBS. Some shows are more interesting than others. Shark Week grabs my interest. Generally speaking Bird Watching does not.

But one evening long ago I happened across a program on the flora and fauna of the Holy Land. And for some reason, my attention was captured by an aquatic fowl called the “Grebe“.

Contrary to the old saw… The Grebe looks like a duck, walks like a duck, and swims like a duck… but honest… it’s not a duck. It’s a Grebe. There are 5 different kinds in Israel, and beyond what I’m about to say, I can’t remember much about them. But here is what I found fascinating about the Grebe in Galilee…

Like most water fowl, Grebes nest on shore quite near the water’s edge. Adults cover their eggs with grasses, and spend most of their time in the water. They can dive for fish, and are much more comfortable in the water than on land. When their chicks hatch, they can swim almost immediately, and will follow their mother hither and yon. All this sounds like a duck so far, right? But here’s what’s different and propelled me into some moments of deep worship.

When duck chicks are threatened, as by a fox or other predator, they will head into the water and swim away, following their mother in a line. This is good… but still leaves them exposed individually, a bit vulnerable.

But when a mother Grebe sees danger on shore, she races to her chicks and backs up to them, dipping her tail to make a ramp onto her back. Her chicks “climb aboard” her body itself, and she tucks their little bodies under her wings. She sails out to deep water like a viking ship, her offspring’s heads bobbing above the edge of her wings, as they ride as safe and secure as if buckled into a child seat.

The Grebe flees from danger at the full-blown speed of the adult, not the baby paddling of newborn ducklings. The Grebe maneuvers with the skill of the canny mother, not the naive duckling. And the protective Grebe mother moves them quickly out into deep water, far from the shallows of ducklings.

As I watched this program, I found myself hearing Psalm 63:7 echoing in my mind. In fact, there was a worship song I used to sing that contained the verse “Beneath the shadow of Your wings I will rejoice, to find a dwelling place secure”. (Blest Be the Lord). I thought of King David as a boy shepherd. I wondered how many times he had watched the Grebe save her chicks from a slinking cat, a slithering snake, or a sly fox. I could imagine him seeing the Grebe as a model of safety for her offspring, and this image returning to him years later as he wrote his praises to God for His protection and care.

Whenever I see Jesus speak of gathering His children as chicks… to this day, I never envision a chicken (as do most of my friends) covering her chicks in the barnyard with her flapping wings. I still see the Grebe, sailing serenely out to safety as she clamps them firmly within the hollow of her breasts.

Beneath the shadow of His wings we can rejoice. We have a dwelling place secure!