Worship without but within words… 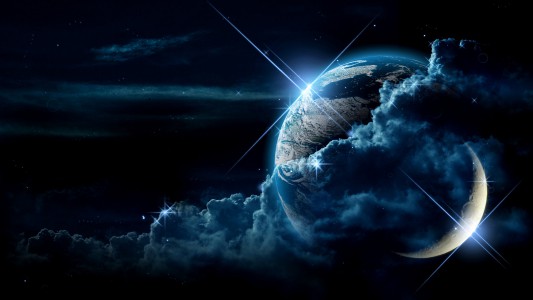 From some years ago…

Sleeping… waken… open eyes… beautiful… lights dancing, but small lights. Seemingly in random motion, yet not… as I rest, relax, cease striving, I see pattern, beauty, praise. This is life itself… rather, Life Himself. Truth, beauty, goodness, love, peace, joy, music, praise, thanks… worship. Somehow, I have wakened inside worship.  How amazing.

And there is caress, a tender hug and enfolding… no words… direct impression of idea… He unspeaks… “Hush… be… I AM… you… be.” Can’t really translate the impression into words. That is as close as I can come. I was simply to exist in Him, and hush. So I did.

And then… I was inside of Someone with no boundaries or limits. Strange, to be inside One Who has no “outside”. But then He spoke, He uttered, and I flowed with that tide, that current from within Him to “other”, to “beyond” Him… He had spoken The Word.

And now, with infinite others, I was inside that Other… Holy Other… spoken forth from the First, from the Prime Mover… still dancing lights, all the same, identical pattern, Life Himself. Truth, beauty, goodness, love, peace, joy, music, praise, thanks… worship. No different, yet different, for now all this worship and praise had an Object, a Focus, the Other, the Prime Mover.

And This One, This Holy One, spoken forth from the Object of His Love, now spoke forth His Own First Word… it was, “Father”, as He wholly and entirely adored the Prime Mover. And again there was movement, the lights, we, flowed from Him, outwards, back to the Father. Amazing.

And then, between them, forevermore, remained that “word” that “bridge” the relationship between Them. And it grew, expanded, encompassing all and everything, in its own light, as This Too became Alive and Whole in and of Himself… the Relationship Between Them, as the Prime Mover spoke again… the word “Son.”

There was nothing to say, nothing to do, nothing to think, but to flow with this Life, this Love, these Words… There was no awareness of anything beyond the moment… the “I”… the “Now”… the “Here”… and Here, was, distinctly, worship.

Oh, sweet irony. I do not wish to speak. I am yet There… and when I “hush”, when I now “relax” and allow Him to draw me into Him with “no distance”, “no apartness”, then my mind stops thinking, there is no more I/Thou, and I am there! Such… no, no words. The sweetness, the joy and light of that, is so immediate, so poignant, that it pierces the heart and soul. Seems strange to say… joy so great it is nearly painful in its intensity. A moment more… then work… then obedience…

There are some who pray, who have discovered God in Silence. I never understood before. Trappists, Carthusians… My Jesuit father frequently said, if God did not command his obedience and service as a Jesuit, or if the Order ever chose to release him (as he had a request before them to do for years)… he sought to join a Carthusian monastery he knew. I asked why, and he said, “They are forever silent. They live ever in His immediate presence, and hear only Him. God grants me that only when I contemplate… but then commands me to teach. So I obey. But someday, if He grants my wish and reward, I shall be a Carthusian.”

I did not understand. I do now.

The Music! The Harmonies of the Silence! Would that I never again spoke or uttered a sound. The irony. It seems I very much am “my father’s child”. Now, that finally I desire no speech… now I am properly prepared to craft words. Now, it is time… to teach. Though all I would seek is solitude and silence.

5 responses to “Worship without but within words…”

Leave a Reply to Cate B Cancel reply