Once Upon a Time: There Was a Knight 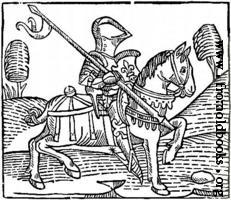 Once upon a time, the Lord King selected a willing warrior, and tasked him to protect a valley nestling a lovely village dear to the Lord King’s heart.

“I shall go,” exclaimed the Knight, pleased to be of service. “From what am I to protect them?”

“You will see,” answered the Lord King.

So the Knight donned his finest armor, selected his keenest weapons and stoutest shield , mounted his bravest steed, and set off towards the valley. As he approached from the south, he crested a ridge and found himself high above the valley that opened like a chasm before him. Across the way, at the opposite side, was the northern crest upon which sat mounted a dark figure, also surveying the valley and its inhabitants.

Instantly, the Knight knew that this was his adversary. He knew that his duty was to protect this valley and these people from being harmed by that dark knight opposing him. He watched as the shadow warrior dismounted his own horse and slowly strode pensively along his cliff, surveying the valley below.

The adversary drew out a bow and began to fire arrows of dark fire into the valley. Wherever his darts struck, there was a splash of shadow and destruction, and the sounds of misery or screaming echoed up to the cliffs.

The Knight’s first thought was to attack in return. Drawing his own bow, he fired arrows of light at the enemy. The arrows shot straight and true directly towards the heart of the aggressor. But yet, they would not find purchase. The enemy would duck, dodge, or twist with preternatural speed, always avoiding a mortal strike. The arrows did distract him a bit, though. So that the enemy’s arrows of dark fire were now directed largely at the Knight, making him dismount (not to be so easy a target), and raise his shield in his own defense. The dark arrows were extinguished harmlessly, when blocked by his shield.

Still, the enemy’s arrows rained regularly down on the people, even as some of them sped toward the Knight. As the Knight was forced to raise his shield often to protect his own heart, the enemy took advantage to attack the village. The enemy was quickening his pace by the moment, and his dark arrows were flying at a remarkable rate.

“This is not working,” thought the Knight. “My attacks on him find no purchase, and though it seems that I am safe, the people are suffering.”

The Lord King’s voice seemed to speak gently into his ear, “You are trying to attack him directly. What if you simply defend the people? Your shield will reach beyond yourself.”

So the Knight sheathed his sword, and focused a moment on his shield. He discovered that he could extend his arm towards the village, as he saw where a dart would strike, and sail a shield out through the air over the people. The dart would strike the sheltering shield harmlessly, sparing the people beneath.

So the battle progressed, ever faster, as the enemy rained down arrow after arrow, and the Knight flung one shield after another like a discus to intercept each blow. But as time passed, the Knight began to tire. The enemy was utterly tireless, and the weaker and slower the Knight became, it seemed the stronger and faster rained the arrows.

Eventually (it seemed like hours, though it may have been but moments), the Knight began to lose heart, realizing he could not keep up this pace.

“Lord King, I am failing in my task. I cannot protect these people. I am flagging, and the enemy is too strong. He grows stronger as I grow weaker. Behold, even now, the people are at his mercy…” choked the Knight. For indeed, it seemed that for every arrow blocked, blindingly quick though the battle progressed, still two others slipped through devastating the village like flaming mortars of pitch blackness.

“This is what you needed to understand, My son. No matter how sharp your weapons, how stout your armor, or how valiant your mount, you alone… with all your strength and training… simply CANNOT stand against such creature of darkness. All of those things can strengthen you, embolden you, give you affirmation of your mission and confidence. But none of that gives you the resources to prevail against such an adversary.”

“What then am I to do? Why did You send me here?” lamented the miserable Knight.

“To protect this village. To guard this valley,” responded the Lord King.

“But HOW, Majesty?” the Knight cried, in utter defeat.

“Ah,” the Lord King replied, as you could almost hear the smile in His voice. “NOW you are asking, and asking the right question. Now… Behold…”

And the Knight felt his body relax, as though a child in the arms of his trustworthy father. His sword, shield, bow, all weaponry fell away from him. His helmet drifted away. His armor fell away. He stood arms wide open, splay legged, in simple white robe, seemingly utterly helpless and vulnerable on his cliff above the valley.

Until Light, indescribable, warm, brilliant Light… began to infuse him from all around. The glow, the joy, the awareness was both unspeakably wondrous, and unbearably powerful all at the same time. He lost all sense of what was happening, lost all awareness of time, or questions, or answers, or even himself as himself. All the Knight still knew was that… he WAS… He IS. The will of the Lord King was his own will, His desires his desires, and His love his love.

His eyes… his eyes were changed and new. His heart was changed and new, and his heart now held mastery over his eyes. He looked outwards, his arms open wide, and all… ALL was light.

He looked downwards, into the valley, and saw with all the love in his heart, the people there. His ears heard their cries, their joys, their pains. And as he noticed their sufferings, as he realized the darts were striking the streets and homes from overhead, he focused on the opposite crest and for the first time noticed the enemy there.

Suddenly, his love for the people, his passion, his care for and heart of protection for them, caused a phenomenal explosion… a blinding flash and deafening report… as Light burst forth with the strength of a thousand suns, flooding all the land and sky for just a moment as his love for the people, his protection and care for them, utterly overwhelmed him.

In the next moments, as the echoes drifted away, the Knight (now quite recovered as himself) looked down at the valley and saw all filled with light, with hope, with love, and with joy. Looking opposite, there was no more presence of the enemy or of shadow.

And so, in great peace and satisfaction, he set up his camp there on the pinnacle… to protect and to serve the people evermore. He now understood, no force of arms that he could bring to bear would guard them. But the Lord King… within him, through him, around him… when he focused utterly on His Majesty and HIS love for the people… this would care for the people.

Was he, this mighty Knight, sent here to use his strength to protect the valley?

No. He could not succeed at that.

Rather, he, this mighty Knight, was sent here to acknowledge in his weakness that he could NOT protect the valley, but to provide a vessel and a voice, to make way for the Lord King Himself to do so through him.

He became one of the greatest and wisest Knights in the Kingdom, and lived very happily ever after.

2 responses to “Once Upon a Time: There Was a Knight”