RSS
← Truth with Grace
What is a Christian? → 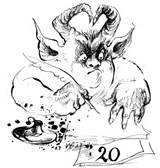 Don Merritt made a fabulous comment on the preceding post that made me roar with laughter… certainly not at DON… but at myself, and frequent memories of the dilemma he poses here.

His comment brought to mind this passage from The Screwtape Letters, by C.S. Lewis (and if you’ve not enjoyed this work, you’ve missed a wondrous joy in this Kingdom!)

MY DEAR WORMWOOD, The most alarming thing in your last account of the patient is that he is making none of those confident resolutions which marked his original conversion. No more lavish promises of perpetual virtue, I gather; not even the expectation of an endowment of “grace” for life, but only a hope for the daily and hourly pittance to meet the daily and hourly temptation! This is very bad.I see only one thing to do at the moment. Your patient has become humble; have you drawn his attention to the fact? All virtues are less formidable to us once the man is aware that he has them, but this is specially true of humility. Catch him at the moment when he is really poor in spirit and smuggle into his mind the gratifying reflection, “By jove! I’m being humble”, and almost immediately pride—pride at his own humility—will appear. If he awakes to the danger and tries to smother this new form of pride, make him proud of his attempt—and so on, through as many stages as you please. But don’t try this too long, for fear you awake his sense of humour and proportion, in which case he will merely laugh at you and go to bed. (C.S. Lewis, The Screwtape Letters, Chapter XIV)

For the Christian (Believer, Disciple, Minister… anyone) who is determined to grow in grace and truth in Christ, one of the most frustrating and ironic features of this life is the apparent inevitable aftertaste of pride in moments of grace.

Here is Don’s comment, that dropped the pebble for these ripples…

I laughed because I live in that same mantrap. I seek to yield to the transformation, the regeneration, from old to new man in Christ. In those moments where I manage not to sabotage the effort, and the Lord actually gets to let Jesus be Jesus in me, the enemy can hold up a mirror to my face in a heartbeat and go, “Lookie Lookie here! Behold your Self and glory in your nanosecond of selflessness!”

Ugh! And I feel as defeated as ever. The second thought comes hard on the heels of the first… “Well, if that’s what it’s always going to be, this endless cycle of futile irony, why even bother to try?”

And that’s when the Lord cuts in with His accustomed clarity to say, “Because the mirror wasn’t yours, and that’s not what it’s about anyway. I’m not ‘keeping score’.”

Lewis says it so much better than I can, I’m not sure how I dare comment on it, but my heart’s response to Don’s comment (from my own ironic reflections) were three fold:

Now, this is not to say we ever get where we are “trip proof” and “sin free”. I sure haven’t, and I’ve not met any but One who ever has. But I can say, I DO know, the tolerances get smaller and smaller. The issues more sensitive and the conscience much more responsive to grace.

Given time and practice, we can come to wound one another vastly less, and flow grace forth vastly more. The enemy still plays his games and we still get to grow and strengthen, but the “playing fields” get much much smaller, and more private. The relationship with God gets stronger and stronger, and more intimate.

Anyway, bottom line… Keep on keeping on, retying our shoes as often as necessary, and laugh at the prank intended as a disastrous distractor. Jesus always knew the trip was there, and He steadies our elbows every time, when we let Him.

Grace and joy to all! The Little Monk

← Truth with Grace
What is a Christian? →

One response to “Tripping over Aglets”