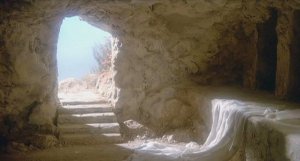 I just want to post this quick note on this incredible and special day.

If you follow this blog at all, you know that lifting up Jesus is my passion, and I’ve talked of Him and the Cross often in these recent days.

But I’d just like to note a thing that rankled on me one day a while back. I listened to a very Christian preacher who I love dearly, share from the pulpit on an Easter Morning. He intensely shared his heart that he felt that all the Resurrection stuff focusing on Easter was misplaced. That the Cross was the important element, and Jesus’ sacrifice on the Cross was where we should focus. That all the attention paid to Easter somehow took something away from Good Friday and Jesus. To Him, Easter was the “day Jesus was absent”, and therefore not of the great importance Christendom placed upon it.

Um… be proud of me, Gentle Readers… if you know me very well, that is… because I SAID NOTHING about this to him, either then or thereafter. This is the first time I’m mentioning it, and it was years ago!

Now, any of us might critique that underlying theology, given that Paul declares the Resurrection to be of singular importance to Christian faith and witness. But, besides that, I found myself a bit “squirming” and uncomfortable about the lack of recognition or appreciation of the FATHER’s role in all this.

Good Friday, the Crucifixion and all the Passion that led up to it, is indeed an unspeakable tableau of love, grace, and courage as Jesus walked through inconceivable suffering to pay the price of our redemption. No doubt of that at all.

The other day I wrote of the extraordinary Trust involved in the Cross. But throughout this wondrous time, Holy Week, Maundy Thursday, Good Friday, Holy Saturday, even today.. Easter, Resurrection Sunday… I seldom hear the Father addressed or appreciated at all. And really… Friday was Jesus’ day to shine and be glorified… today is the Father’s.

Acts 2:24 But God raised Him up again, putting an end to the agony of death, since it was impossible for Him to be held in its power.

Acts 3:26 For you first, God raised up His Servant and sent Him to bless you by turning every one of you from your wicked ways.”

Acts 5:30  The God of our fathers raised up Jesus, whom you had put to death by hanging Him on a cross.

Acts 10:40   God raised Him up on the third day and granted that He become visible,

Romans 7:4 Therefore, my brethren, you also were made to die to the Law through the body of Christ, so that you might be joined to another, to Him who was raised from the dead, in order that we might bear fruit for God.

Romans 10:9  that if you confess with your mouth Jesus as Lord, and believe in your heart that God raised Him from the dead, you will be saved;

Galatians 1:1  Paul, an apostle (not sent from men nor through the agency of man, but through Jesus Christ and God the Father, who raised Him from the dead),

Colossians 2:12  having been buried with Him in baptism, in which you were also raised up with Him through faith in the working of God, who raised Him from the dead.

1 Peter 1:21 who through Him are believers in God, who raised Him from the dead and gave Him glory, so that your faith and hope are in God.

Now, I ask you, who is the “God who raised Him from the dead and gave Him glory”? Jesus did not raise Himself. He could not. Not once He died. He had given up His authority and life, and cast His fate entirely upon the Father in faith, hope, and love.

And Jesus, crying out with a loud voice, said, “Father, into Your hands I commit My spirit.” Having said this, He breathed His last. [Luke 23:46]

Anyway, rest assured, Resurrection Sunday is a tremendous testament and glory to Jesus Christ. His resurrected self, the testimony of witnesses and angels, make this an altogether spectacular day in our worship of Him and His grace in our redemption.

But I just feel like I want to raise and flap a little pennant here on behalf of the Father as well! So often that “God”, as presented in the Old Testament, is seen as the dour stern judge that Jesus has to RESCUE us FROM! We deal with this all the time. So many Christians I know can readily accept the reality of grace at the hands of Jesus, but really struggle to envision that from the Father. Even though Jesus has said that to see Him is to SEE the Father, or that He (Jesus) only speaks the Father’s words, and only does His works.

But right here, on Easter Resurrection Sunday, we see THE FATHER move in grace. He, and He Alone, raised Jesus from death to life. He fulfilled the plan they had carried out now for 33 years, which they had drafted from the Fall of Man.

I love Easter Sunday. I love Resurrection Sunday. But in large part, I love it in recognition of another name it could go by…

2 responses to “Easter as Father’s Day”