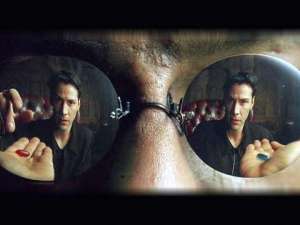 OK, nothing like making the title of this post two “Hot Buttons” of religious/academic debate and dispute… right? Are you thinking you need to don “protective gear” for this one?

No, Gentle Reader. No such thing. We are not going to try to tiptoe through either minefield here today.

All I want to do here is bring up a little different perspective for looking at life as a Kingdom Dweller and Royal Child of God… (which you are), in light of the chaos that seems so often to surround us.

First, let’s go back a moment, to good old Sociology 101 and revisit what a “culture” is.

: a way of thinking, behaving, or working that exists in a place or organization (such as a business)

Thinking back to those boring social studies classes, “cultures are distinguished and generally defined in terms of their ‘norms’, ‘mores’, and ‘values’, both explicit and implicit.”  What does all this mean in everyday language? Our culture is our mutual expression of society and social (group) life, in a given time and place, among a given people.

That is, culture evolves and emerges from the way in which people live their everyday lives. It’s what so commonly called, “the way we do things around here.” When a newcomer (to town, to a school, to a company, or even a church) asks, “why do we do things THIS way?”, they are likely to hear the response, “because that’s how we ALWAYS do it.” This is an expression of culture. It should go without saying that this is a “symbiotic” relationship. That is, just as it is people who generate the patterns of culture, so too, culture helps form the patterns people’s interactions. Culture is the framework we erect around us, and people as a whole tend to operate within that framework.

Why so much emphasis and focus on this old, boring, freshman year “Humanities” course? Well, because somehow this has become a life-or-death cause célèbre among so many of my loving and beloved Christian brethren.

I have elements I would like to bring before you, then challenge you to take these to your own Prayer Garden, ponder your Rose and His petals, and then “whatever He tells you to do, do that.” K?

19 The woman *said to Him, “Sir, I perceive that You are a prophet. 20 Our fathers worshiped in this mountain, and you people say that in Jerusalem is the place where men ought to worship.” 21 Jesus *said to her, “Woman, believe Me, an hour is coming when neither in this mountain nor in Jerusalem will you worship the Father. 22 You worship what you do not know; we worship what we know, for salvation is from the Jews. 23 But an hour is coming, and now is, when the true worshipers will worship the Father in spirit and truth; for such people the Father seeks to be His worshipers. 24 God is spirit, and those who worship Him must worship in spirit and truth.” [John 4]

11 “I am no longer in the world; and yet they themselves are in the world, and I come to You. Holy Father, keep them in Your name, the name which You have given Me, that they may be one even as We are. 12 While I was with them, I was keeping them in Your name which You have given Me; and I guarded them and not one of them perished but the son of perdition, so that the Scripture would be fulfilled. 13 But now I come to You; and these things I speak in the world so that they may have My joy made full in themselves. 14 I have given them Your word; and the world has hated them, because they are not of the world, even as I am not of the world. 15 I do not ask You to take them out of the world, but to keep them from the evil one. 16 They are not of the world, even as I am not of the world. 17 Sanctify them in the truth; Your word is truth. 18 As You sent Me into the world, I also have sent them into the world. 19 For their sakes I sanctify Myself, that they themselves also may be sanctified in truth. 20 I do not ask on behalf of these alone, but for those also who believe in Me through their word; 21 that they may all be one; even as You, Father, are in Me and I in You, that they also may be in Us, so that the world may believe that You sent Me.” [John 17]

29 His disciples *said, “Lo, now You are speaking plainly and are not using a figure of speech. 30 Now we know that You know all things, and have no need for anyone to question You; by this we believe that You came from God.” 31 Jesus answered them, “Do you now believe? 32 Behold, an hour is coming, and has already come, for you to be scattered, each to his own home, and to leave Me alone; and yet I am not alone, because the Father is with Me. 33 These things I have spoken to you, so that in Me you may have peace. In the world you have tribulation, but take courage; I have overcome the world.” [John 16]

“Whoever believes that Jesus is the Christ is born of God, and whoever loves the Father loves the child born of Him. 2 By this we know that we love the children of God, when we love God and observe His commandments. 3 For this is the love of God, that we keep His commandments; and His commandments are not burdensome. 4 For whatever is born of God overcomes the world; and this is the victory that has overcome the world—our faith. 5 Who is the one who overcomes the world, but he who believes that Jesus is the Son of God?” [1 John 5:1-5]

Granted, that’s a LOT of scripture, Gentle Reader. But be comforted, we are not going to analyze it. I have chronicled this to highlight a very specific element addressed both by Jesus and John.

Well… well… then what does this MEAN? I mean, just look around! Clearly society and the world are in a mess! Clearly our culture is dissolute, driven by greed, fear, sensuality, violence, and anything BUT the “sacredness of others”!

I am not here today to “tell you” what all that means. I’m not really trying to “teach” here this day. But I just want to raise some questions in your mind, heart, and spirit to take to Him, to the Teacher, the Holy Spirit, and see if He has Rose petals for you, pearls of great price to place with your own Treasure in your heart.

Do you see the questions in my mind?

What if, indeed, the Lord has “set us” into the stage and scene of His choice (in that He has all of time and space to choose from), and our “role” is always the same… to bring His Presence into our particular and specific “now”, whatever that happens to be?

What if He is the Grand Director and Producer? What if our job, as actor, is simply to perform? Where He has already fulfilled His own responsibilities to furnish and populate the stage?

What if I were an actor that reads a lot of different plays and I like some better than others, and then I’m hired to play a part in a particular production. When I get to my first performance, I “don’t like” my stage setting, so instead of playing my part, saying my lines, interacting with the other players… instead I start moving furniture around, removing and acquiring new props, and complaining about the stage set? Would I be doing what I was called to do?

I am constantly amazed at churchmen who decry our “culture”. The Early Church flourished as it did in a culture so horrible as nearly to defy imagining. Those were TERRIBLE TIMES. The Temple had their own police to collect their taxes. Slavery was not only tolerated as law of the land, but enforced by religious authority as well. Believers were arrested, beaten, imprisoned, tried, executed, and often tortured for the amusement of onlookers. Frankly, given a choice between being a Believer in 1st Century Rome or Jerusalem, and being a Believer in 21st Century Here… I’m grateful God placed me HERE. (Let’s not romanticize things, please.)

We are incredibly BLESSED to be here, now, if we choose to fulfill our roles. We have vastly more opportunity to do what the First Century Church did, holding all things in common, giving for the needs of others, feeding, clothing, visiting, praying, worshiping, sharing… you NAME it… and no one here will arrest or torture us for it (which is more than can be said of other parts of the world, even now).

IS there such a thing, as a MEANINGFUL “Culture War”? Or, are we looking at actors who have lost track of Reality… Who mistake “stage dressing” for the Reality into which Jesus has translated us? Should our task and focus be on changing the “set design”? Or on interacting with all the others on stage to communicate the Message with which we have been sent?

I ask, should ANY Christian, be FIGHTING a Culture War?

Hasn’t Jesus already WON that? Is Christ not the Victor?

Is our task rather, to rescue and heal the broken, battered, wounded, and orphaned CASUALTIES of such a war?

Are we, rather, just marching about the battlefield, killing off all the wounded?

The photo that opens this post is from the movie, The Matrix. It is the pivotal scene where Morpheus offers Neo a choice between taking the Blue Pill or the Red Pill. Take the Blue Pill, and stay in the illusion “OF the world” believing that the stage set is reality itself. Or, take the Red Pill and awaken forever, disconnected forevermore from the fantasy world of Matrix, and thus now able to enter into the Matrix at any point, to help bring freedom to others enslaved.. “IN the world”.

For a very long time, Gentle Reader, I have spent my life and career, like Morpheus, finding sleepers and offering them a choice between Blue Pill and Red Pill. For it is, indeed, a choice. To be so hypnotized, so distracted by the illusion, of the “stage set” that we invest our lives there, our hearts there, our treasure there, our personal sense of worth and identity, there. OR… in the alternative… we can “metanoia”… we can “beyond see”… see beyond the illusion and set dressing of this framework, this culture, this time and place, and find the God who seeks after US to worship Him in spirit and in truth… to invest ourselves THERE, in eternal life, as Jesus has brought it to us.

So there ya go, Gentle Reader. Up to you… *offers you a silver pillbox with two compartments. One is filled with red gel capsules, the other with blue.* Now, do what you will. Take a Blue, if that is more comfortable. In that you are here at all, you probably took a Red long ago. But now you have your very own supply. Feel free to join me in my quest… to find those who know… absolutely KNOW… there’s something MORE than the stage props. But who haven’t quite totally awakened, to get unhooked from the illusion of the Matrix yet.

Let us together carry on with Jesus’ commission and great joyful task… that we Set the Captives Free! Which pill have you chosen?